HashMap<K, V> is fast, versatile and ubiquitous data structure in every Java program. First some basics. As you probably know, it uses hashCode() and equals() method of keys to split values between buckets. The number of buckets (bins) should be slightly higher than the number of entries in a map, so that each bucket holds only few (preferably one) value. When looking up by key, we very quickly determine bucket (using hashCode() modulo number_of_buckets) and our item is available at constant time.

This should have already been known to you. You probably also know that hash collisions have disastrous impact on HashMap performance. When multiple hashCode() values end up in the same bucket, values are placed in an ad-hoc linked list. In worst case, when all keys are mapped to the same bucket, thus degenerating hash map to linked list - from O(1) to O(n) lookup time. Let's first benchmark how HashMap behaves under normal circumstances in Java 7 (1.7.0_40) and Java 8 (1.8.0-b132). To have full control over hashCode() behaviour we define our custom Key class:

Key class is well-behaving: it overrides equals() and provides decent hashCode(). To avoid excessive GC I cache immutable Key instances rather than creating them from scratch over and over:

Now we are ready to experiment a little bit. Our benchmark will simply create HashMaps of different sizes (powers of 10, from 1 to 1 million) using continuous key space. In the benchmark itself we will lookup values by key and measure how long it takes, depending on the HashMap size:

The results confirm that HashMap.get() is indeed O(1): 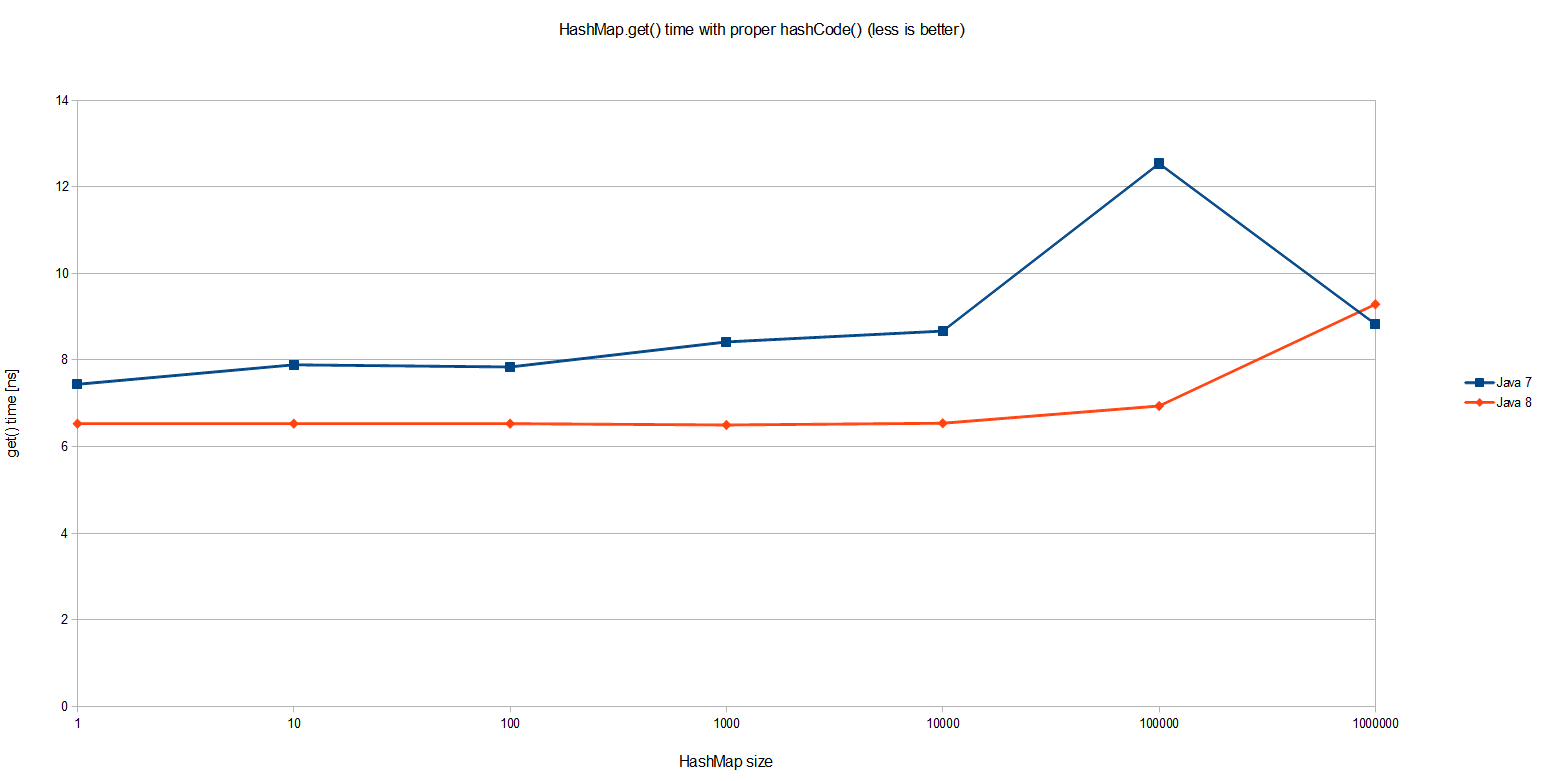 Interestingly Java 8 is on average 20% faster than Java 7 in simple HashMap.get(). The overall performance is equally interesting: even with one million entries in a HashMap a single lookup taken less than 10 nanoseconds, which means around 20 CPU cycles on my machine*. Pretty impressive! But that's not what we were about to benchmark.

Suppose that we have a very poor map key that always returns the same value. This is the worst case scenario that defeats the purpose of using HashMap altogether:

I used the exact same benchmark to see how it behaves for various map sizes (notice it's a log-log scale):

Results for Java 7 are to be expected. The cost of HashMap.get() grows proportionally to the size of the HashMap itself. Since all entries are in the same bucket in one huge linked list, looking up one requires traversing half of such list (of size n) on average. Thus O(n) complexity as visualized on the graph.

But Java 8 performs so much better! It's a log scale so we are actually talking about several orders of magnitude better. The same benchmark executed on JDK 8 yields O(logn) worst case performance in case of catastrophic hash collisions, as pictured better if JDK 8 is visualized alone on a log-linear scale: 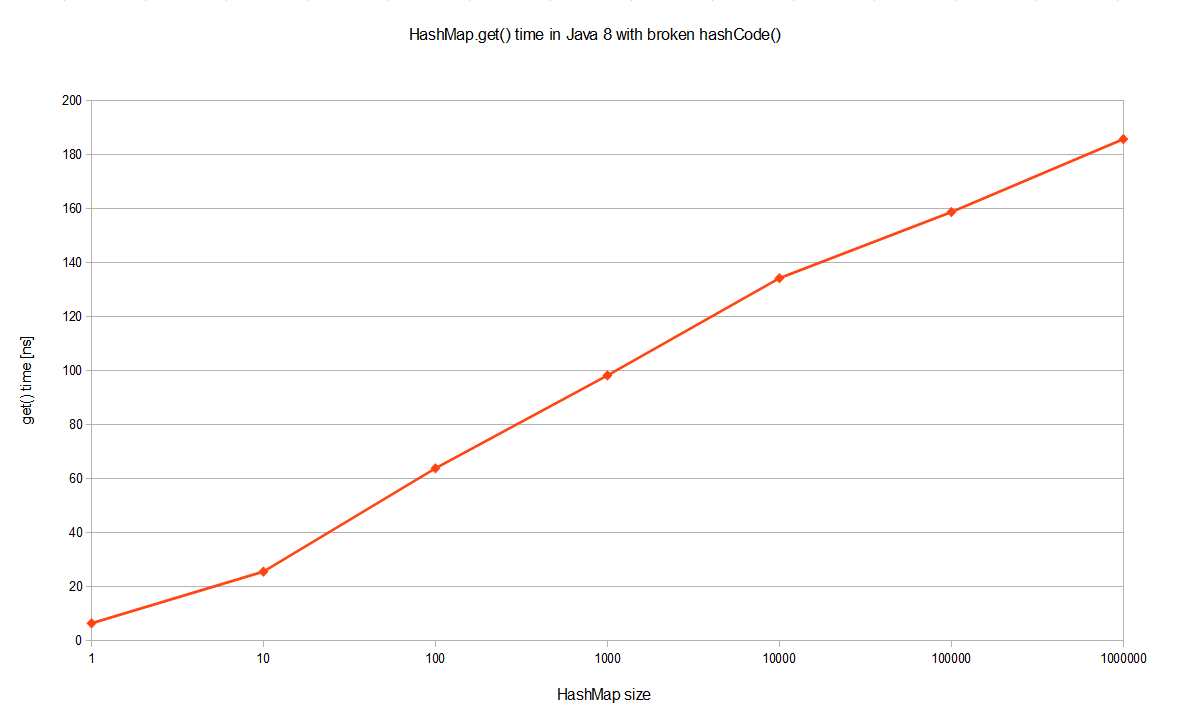 What is the reason behind such a tremendous performance improvement, even in terms of big-O notation? Well, this optimization is described in JEP-180. Basically when a bucket becomes too big (currently: TREEIFY_THRESHOLD = 8), HashMap dynamically replaces it with an ad-hoc implementation of tree map. This way rather than having pessimistic O(n) we get much better O(logn). How does it work? Well, previously entries with conflicting keys were simply appended to linked list, which later had to be traversed. Now HashMap promotes list into binary tree, using hash code as a branching variable. If two hashes are different but ended up in the same bucket, one is considered bigger and goes to the right. If hashes are equal (as in our case), HashMap hopes that the keys are Comparable, so that it can establish some order. This is not a requirement of HashMap keys, but apparently a good practice. If keys are not comparable, don't expect any performance improvements in case of heavy hash collisions.

Why is all of this so important? Malicious software, aware of hashing algorithm we use, might craft couple of thousand requests that will result in massive hash collisions. Repeatedly accessing such keys will significantly impact server performance, effectively resulting in denial-of-service attack. In JDK 8 an amazing jump from O(n) to O(logn) will prevent such attack vector, also making performance a little bit more predictive. I hope this will finally convince your boss to upgrade.