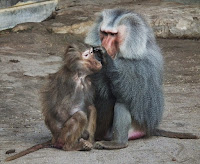 TL;DR: I did a computer simulation of behavior evolution of monkeys, continue reading to see how problem was stated originally in The Selfish Gene. First part shows my Java implementation, second part shows charted results and conclusions.

I read The Selfish Gene by Richard Dawkins recently, very wide-opening book despite being 40 years old. While the original text is sometimes outdated ("you could pack only a few hundred transistors into a skull - more like trillions these days, hello Moore's law) general claims are as appealing as they used to.

One chapter that especially grabbed my attention, as a computer engineer, was about animals performing social grooming, like some species of monkeys (see picture above). Let me quote relevant chapter:

Suppose a species [...] is parasitized by a particularly nasty kind of tick which carries a dangerous disease. It is very important that these ticks should be removed as soon as possible. [...] An individual may not be able to reach his own head, but nothing is easier than for a friend to do it for him. Later, when the friend is parasitized himself, the good deed can be paid back. [...] This makes immediate intuitive sense. Anybody with conscious foresight can see that it is sensible to enter into mutual back-scratching arrangements. [...]

Suppose B has a parasite on the top of his head. A pulls it off him. Later, the time comes when A has a parasite on his head. He naturally seeks out B in order that B may pay back his good deed. B simply turns up his nose and walks off. B is a cheat, an individual who accepts the benefit of other individuals' altruism, but who does not pay it back, or who pays it back insufficiently. Cheats do better than indiscriminate altruists because they gain the benefits without paying the costs. To be sure, the cost of grooming another individual's head seems small compared with the benefit of having a dangerous parasite removed, but it is not negligible. Some valuable energy and time has to be spent.

Let the population consist of individuals who adopt one of two strategies. [...] Call the two strategies Sucker and Cheat. Suckers groom anybody who needs it, indiscriminately. Cheats accept altruism from suckers, but they never groom anybody else, not even somebody who has previously groomed them. [...] the cheats will be doing better than the suckers. Even if the whole population declines toward extinction, there will never be any time when suckers do better than cheats. Therefore, as long as we consider only these two strategies, nothing can stop the extinction of the suckers and, very probably, the extinction of the whole population too.

But now, suppose there is a third strategy called Grudger. Grudgers groom strangers and individuals who have previously groomed them. However, if any individual cheats them, they remember the incident and bear a grudge: they refuse to groom that individual in the future. In a population of grudgers and suckers it is impossible to tell which is which. Both types behave altruistically towards everybody else [...]. If grudgers are rare in comparison with cheats, the grudger gene will go extinct. Once the grudgers manage to build up in numbers so that they reach a critical proportion, however, their chance of meeting each other becomes sufficiently great to off-set their wasted effort in grooming cheats. When this critical proportion is reached they will start to average a higher pay-off than cheats, and the cheats will be driven at an accelerating rate towards extinction. [...]

Later on the author conducts a series of computer simulations to observe how these three strategies play together under various conditions. Obviously source code is not available, and I'm actually happy about it. Firstly because I had an opportunity to write some code for fun. Secondly: book was published in 1976, 4 years after C was invented and many years before C++ (to put you in perspective) and I am not really in a mood for (I guess) Fortran.

So I hacked few classes to perform a simulation of cheaters, suckers and grudgers throughout the population. I want to see how different types of behaviors affect population size. Which behavior is stable and guarantees survival. Finally how random mutations and deaths are mitigated. I decided to experiment with some techniques namely:

We are going to simulate a population of monkeys (from just few to millions), each one with independent behavior, random life time and so on. It seems obvious to use multi-agent solution like actors or at least threads. However Principles of Reactive Programming course taught me that this is often an over-engineering. Essentially such a simulation is a sequence of events that should happen in the future: a monkey should be born in 2 years, should breed in 5 years and should die in 10. Of course there are many more such events and more monkeys. However it's enough to throw all these events into a single priority queue where closest events in the future are first. That's how Planner is essentially implemented:

We have an Action with predefined schedule (when it should be executed) and a pending queue of future actions. There is no need to wait, we just pick nearest action from the future and advance simulation time:

So we essentially implemented an event loop where events can be added anywhere within the queue (not necessarily at the end). Now when we have a basic framework, let's implement monkeys' behaviors:

As you can see these three classes capture three different behaviors. Suckers always accept grooming requests, Cheaters only sometimes (in original simulation - never, but I made this configurable), Grudgers remember who rejected their request previously. Monkeys are aggregated within a class Population, here is a small snippet:

For each new monkey we schedule its so-called lifecycle, i.e. events related to breeding, grooming and death (in Planner):

I encapsulate all simulation parameters in a simple value class Environment, many parameters like parasiteInfection, lifetime or breeding aren't constants but instances of RandomPeriod class:

This allowed me to capture the concept of random period of time with expected value, standard deviation and normal distribution. make() method simply generates one such random period. I am not going to explore full source code of this simulation, it's available on GitHub. Now it's finally time to run it a few times and observe how population grows (or extincts). By the way I use the same planner and action mechanism to peek what happens: I simply inject Probe action once every year (logical time!) and output the current population size.

Just as with many event loops, there must be just one thread accessing events. We followed this practice, the simulation is single-threaded, thus there is no need to perform any synchronization or locking at all, we can also use standard, unsafe but faster collections. Less context switches and improved cache locality help as well. Also we can easily dump simulation state to disk, e.g. to restore it later. Of course there are drawbacks. With thousands of monkeys the simulation slows down and there is not much we can do about it, except careful optimization and buying faster CPU (not even more CPUs!)

As a control group we start with a tiny (10 specimens) population consisting solely of suckers and a mixture of suckers and grudgers. In the absence of cheaters these two behaviors are indistinguishable. We turn off mutation (a possibility that a child of sucker and grudger will become a cheater, rather then sucker or grudger as well) and see how population grows (X axis represents time, Y axis is the population size):

Notice that the proportion of suckers and grudgers fluctuates around 50% since these two behaviors are doing exactly the same. There is no point in running a simulation with few cheaters only. Since they generally don't groom each other, they quickly die, erasing the "cheating gene". On the other hand suckers only (without mutation) are growing exponentially (you can clearly see new generations being born after plateaus):

However what would happen if we simulate a population with 100 suckers and just 5 cheaters? Mutations are again turned off to keep simulation clean:

There are two possible scenarios: either cheaters gene disappears or it spreads and cause the population to extinct. It's kind of a paradox - if this particular gene wins, the whole population (including that gene!) is doomed. Now let's simulate something more interesting. We turn on 5% mutation probability and ask cheaters to groom in 9 out of 10 cases (so they behave somewhat like suckers). We start with a healthy population of 5 suckers and 5 grudgers:

Do you see how grudgers quickly expand and almost always outnumber suckers? That's because suckers are much more vulnerable in an environment where cheaters sometimes appear due to a mutation. Did you noticed how population quickly shrinks every time even a small number of suckers appear? Grudgers are vulnerable as well: they groom newborn cheaters without knowing yet who they are. However they don't repeat this mistake like suckers do. That's why suckers always loose, but they don't extinct entirely since they are somewhat protected by grudgers. Not directly, but grudgers kill cheaters by not grooming them, reducing the threat. That's how different behaviors cooperate. So why did the population extinct after all? Look carefully at the end of the chart, at some point for a random reason the suckers outnumbered grudgers - this was especially possible in the absence of cheaters at that time. So what happened? A few cheaters appeared suddenly due to a mutation and this society of monkeys was doomed.

Now let's study another example: a mature society of 100 suckers living already, no other behaviors observed. Of course due to a mutation grudgers and cheaters quickly emerge. Most of the times this simulation ends very quickly, just after few generations. The probability of cheater being born is the same as the probability of grudger, but we need way more grudgers to protect suckers. Thus the population dies. But I managed to run few simulations where such society actually survived for a while:

Interestingly suckers dominated in the population for quite some time, but yet another epidemic attack of cheaters killed most of suckers. Unfortunately the last growth of cheaters reduced the number of grudgers to the point when they could no longer protect suckers and suddenly everyone dies.

From implementation perspective using single-threaded model and an action queue worked really good, despite being hard to scale. However the biological conclusions are much more interesting:

You are free to extend conclusions to human society. Full source code is available on GitHub, feel free to experiment, pull requests are welcome as well! Tags: biology, simulations