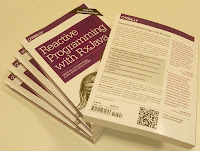 "Reactive Programming with RxJava: Creating Asynchronous, Event-Based Applications" book was finally published on paper.
More than a year of hard work resulted in almost 350 pages packed with RxJava and touching various technologies like Android, Camel, NoSQL, Hystrix and more. It's available as an ebook and in paperback at official O'Reilly store as well as on Amazon. But rather than making a sales pitch I'd like to share some of my experiences with writing my first book.

All authors writing for O'Reilly get access to Atlas - their publishing platform. Atlas is like a combination of GitHub and Jenkins - it hosts your books in built-in git repository and "builds" them. For developers the user experience is very familiar. The one and only source of your book is in O'Reilly-hosted git repository. You can use it as any other repository: commit changes, push to branches, pull revisions from other authors. You can quickly see history of given chapter, revert, etc.

This is all possible because supported formats (AsciiDoc and DocBook) are purely text-based. More on editing later. Atlas also has great documentation and Getting Started guide. Whenever you feel like it you can browse to your book in Atlas (looks like a stripped-down GitHub web interface) and click Build. In about a minute Atlas will show links to PDF, epub, mobi and HTML version of your book. All having consistent look and feel looking almost like a complete publication. The whole process is controlled via tiny atlas.json configuration file. If you want to automate it even further, Atlas exposes an API and command-line interface. I scripted git push so that it was immediately followed by building of final book in various formats and downloading them:

I'm not a bash expert but what it does is:

The whole process takes about one minute so with one command I can publish my work in AsciiDoc and see the final book in beautiful PDF. Atlas does all the formatting, table of contents, index, cover, cross-reference links, etc. That being said it wasn't always painful. I ran into bizarre:

once in a while. However this problem was quickly fixed by O'Reilly team. Also AsciiDoc did not always rendered the way we expected, especially complex tables. I can't compare Atlas with Leanpub (which recently became non-free for authors) but I suspect they are similar in functionality. I'm not sure how other publishers are hosting and distributing manuscripts. I can't imagine using Microsoft Word distributed over e-mail or other non-developer friendly workflow. From a developer perspective O'Reilly is fantastic.

I wrote the entire book in Sublime Text. Typically in Distraction Free Mode so my workspace looked as follows: 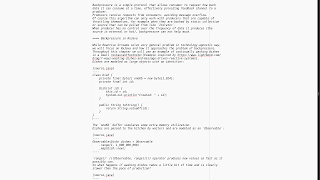 Seriously. I didn't use LaTeX because AsciiDoc was sufficient. Tip for writing in AsciiDoc and Markdown: one sentence per line. Not more, not less. Screen width is a natural limit of how long one sentence should be. Also it's much simpler to move sentences around, delete them and find repetitions. From markup language perspective single line break is transparent, you need at least two to start a new paragraph. Writing in a markup language as opposed to binary format like docx has another advantage: grep, sed and other UNIX goodies work as expected.

To catch simple grammar and typos I installed spell checking in Sublime Text. I configured Sublime a little bit to work better for me:

Couple of words are so common yet unheard of in traditional English that I added them to a dictionary: added_words. highlight_line shows a horizontal light blue line where caret currently is. rulers on the other hand displays vertical line at column 70, which happens to be a line length limit for code listings. You have to be very creative in order to fit code in 70 characters and remain readable. Especially when writing Java, where class names are not much shorter...

I also appreciated the help of Powerthesaurus. I'm not a native English speaker (by far...) so finding a synonym once in a while to avoid too childish or boring style was very useful. Luckily the editors and proof readers made tons of corrections to my manuscript so if you were annoyed by my grammar or style in early releases, the final book should be much better. I was also asked to entirely rewrite several sentences which were hard to understand.

A great number of people helped us in writing this book. I would like to especially thank reviewers: Dávid Karnok and Venkat Subramaniam. Dávid's feedback was very detailed and many times I felt really foolish making simple mistakes and misunderstandings. Venkat on the other hand provided a lot of feedback related to overall reading flow. I rearranged and removed whole chapters based on his feedback (see: Functor and monad examples in plain Java). Their work was great and I truly appreciate it. Thank you guys!

I'm proud to be the first Polish author for O'Reilly, quickly followed by my friend Konrad Malawski. The book is out and it reached #1 and #2 "Hot New Releases" in Object-Oriented Design and Parallel Computer Programming categories on Amazon quickly after release:

"Reactive Programming with RxJava" was based on RxJava 1.x. In the meantime the works on RxJava 2.x (led by aforementioned Dávid Karnok) are very advanced and it should soon be released. This does not make the book obsolete, about 90% of the content is still applicable. However when RxJava 2.x is released and Java ecosystem begins to incorporate it (e.g. RxNetty, Reactive Camel and so on) we (Ben and myself) are considering upgrading the book and releasing second edition. Yet for the time being our book should be quite comprehensive source of reactive programming knowledge. Have fun reading and I'm looking for feedback!